One of the most perplexing issues in healthcare today for US consumers is our cost of care, and what we are getting for those dollars. Although we have always believed that we have the best healthcare in the world, a close look at our system, reveals that we are paying more, getting less, and what we pay is not equal on several counts.

The Commonwealth Fund in a study in June 2014, in conjunction with several healthcare research organizations, conducted a study where their findings reinforce the poor performance of the US in health rankings as compared with other countries. This research revealed that in access to care, equity of care, and health care quality we have a long way to go.

Access to care: People in the U.S. have the hardest time affording the health care they need. The U.S. ranks last on every measure of cost-related access. More than one-third (37%) of U.S. adults reported forgoing a recommended test, treatment or follow-up care because of cost.

Equity: The U.S. ranks last. About four of 10 (39%) adults with below-average incomes in the U.S. reported a medical problem but did not visit a doctor in the past year because of costs, compared with less than one of 10 in the U.K., Sweden, Canada, and Norway. There were also large discrepancies between the length of time U.S. adults wait for treatments and procedures as compared with other countries.

Health care quality: The U.S ranks in the middle. On two of four measures of quality—effective care and patient-centered care—the U.S. ranks near the top (3rd and 4th of 11 countries, respectively), but it does not perform as well providing safe or coordinated care.

We spend approximately two-and-a-half more dollars than most developed nations in the world for health care, including: Germany, France, Sweden and the United Kingdom. Additionally, price inequities that the US consumer would never tolerate in other industries, are standard in healthcare. For example there is a huge disparity (can be many thousands of dollars) in the cost of procedures such as colonoscopies, endoscopies, MRIs.

New York Times columnist Elizabeth Rosenthal has written about how one woman’s colonoscopy at a surgical center near her home on Long Island resulted in a bill of $6,385, while in Keene NH the cost of the same colonoscopy was billed at $7,563.56. A patient in Chappaqua, N.Y. received a bill for $9,142.84 for this procedure and in Durham, N.C., the charges for a patient came to $19,438.” MS Rosenthal points out that “In many other developed countries, a basic colonoscopy costs just a few hundred dollars and certainly well under $1,000.”

So why are we paying so much more and coming out with a lower standard of health care? We are talking about two related issues:

1. The extremely high cost and lower quality of care in the United States compared to our international colleagues and what an individual consumer can do about this.

Obamacare tried to address the issue of our poor performance by finally providing insurance to the millions of uninsured Americans, (approximately 15% of the population) who had no access to healthcare. Unfortunately Obamacare has had enormous problems getting the uninsured signed up for coverage, finding enough medical providers to address the needs of this population and working out the kinks and legal obstacles to providing healthcare for everyone. These issues are far from resolved and the solutions are compounded by the high cost of care that impacts everyone.

Among the elements that are preventing the US healthcare system from reducing disparities in costs of care are:
• Diversity in insurance benefit structures.
• Lack of standards in price information.
• Legal impediments including contractual deals between provider institutions and payers.
• Consumer confusion and inaction

When the doctor tells you that you need an MRI and suggests a clinic where the procedure can be done, are you thinking about what this will cost and where you can find a less expensive option, or are you focused on why you need the MRI and what the results will be, i.e. what is wrong with me? With most of us the cost of the procedure does not hit our radar until the bill comes in.

Is this is going to change as the cost of care continues to rise and much of that cost comes directly out of our pockets? Part of the problem lies in the lack of oversight in the healthcare industry, leaving doctors and hospitals to configure care as they find convenient and basically charge what they deem appropriate or what they are allowed under the arrangements they have negotiated with payers.

In another recent New York Times article, also by Elizabeth Rosenthal, there is the story of a 37-year-old man who required neck surgery for herniated disks. Prior to the surgery he secured all of the necessary consent forms, and clearances from his insurer. Thus, he was prepared when the bills started arriving. He was blindsided, however, by a $117,000 bill from an “assistant surgeon,” who he did not know would be a part of the surgical team.

Today, when the smallest detail about a patient/physician encounter can be recorded and put into the health record, cost of care data is strikingly missing. As a result much confusion, misunderstanding and anxiety ensues. Additionally when cost of care becomes apparent, many patients opt out of procedures and treatments that they realize they cannot afford. Ultimately many of these same patients end up in the emergency room with conditions that have compounded over time, and the cost of care increases for everyone.

To say that the entire system needs to be revamped would not be an exaggeration. Transparency in health care costs is the responsibility of provider and payer organizations who need to reveal the cost of care to patients and provide options that are affordable. Nothing will change, until patients take a stand, challenge the system, demand to know what they will pay for health care and advocate for care that is equitable and equal. 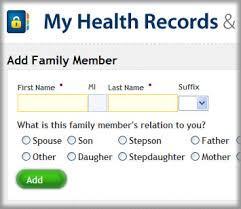 There has been so much discussion online and in the press about electronic health records and physicians sharing EHR data with patients via such tools as OpenNotes and Blue Button, that the personal health record (PHR) has been lost in the dialogue.

The PHR is a tool for you to collect the diverse silos of their health information: current and past history, medications, prescribed and over-the-counter, downloads from apps and wearable devices, allergies, procedures and surgeries, and have that information wherever and whenever you require or seek care. PHRs might also include information that your doctor may not have, such as your exercise routines, hereditary illnesses, or changes in your dietary habits.

Having a PHR should improve your care by providing you with an easy way to share your information with multiple providers. Setting up and maintaining the PHR will also increase your own awareness of your health and help you make informed health decisions.

Your PHR does not replace, the legal medical record (EHR) of your primary care provider. It is a record compiled and maintained by you, and in many situations, is the only place where all of a your medical information including: insurance details, lab results, names and phone numbers of doctors and details of injuries, illnesses, surgeries, procedures, allergies and treatment is available in one document 24/7 on a web-enabled device, such as a computer, laptop, tablet or smart phone.

PHRs, are offered by a variety of sources, such as: health care providers, insurers, employers, commercial suppliers of PHRs. Many physician groups and local hospitals offer PHRs through their patient portals or on their web sites. Payers also offer PHRs on their websites. They can be stored in a number of ways from a simple paper file folder to a USB drive or online through a web-based service that is available so that you can enter and update your health information anytime 24/7.

Among the choices for you to investigate in setting up a PHR are the following online options where viable PHR tools are available and often free:

A 2009 study, reported in Health Affairs, concluded that more than $8 billion is wasted each year because of redundant lab and radiology testing. One of the reasons for patients to have a PHR is the reduction or elimination of these duplicate procedures. With an up to date personal health record that includes all test data and results, a second round of tests become unnecessary.

Additionally with all of the diagnostic tools with sensors on smartphones and wearable items that track fitness and biometrics, data can sync from these apps and devices into the PHR and be sent to your providers, or stored and available when needed.

In a nationally representative survey of more than 2,100 respondents, conducted by the Office of the National Coordinator, and reported in Health Data Management, one-third of individuals reported a gap in health information among their providers or between themselves and their providers. These gaps included one or more of the following: had to bring an X-ray, MRI, or other type of test result to provider appointment; had to wait for test results longer than individual thought reasonable; had to redo a test or procedure because the earlier test results were not available; had to provide medical history again because individual’s chart could not be found; and had to tell a provider about medical history because they had not gotten records from another provider. This reinforces without a doubt the value of the PHR.

When looking at the issue of whether or not patients respond positively to having and using personal health records, a study published online Sept. 8 in the Annals of Family Medicine, found that 25.6 percent of patients used an interactive preventive health record (IPHR), with the rate increasing 1 percent per month over 31 months. Among the study population, nearly one-quarter of users (23.5 percent) signed up within one day of their office visit. IPHR use was more likely among older patients and patients with co-morbidities but less likely among blacks and Hispanics.

Another study by the Center for Information Technology Leadership (CITL), a nonprofit IT research center based at Partners HealthCare System in Boston, suggests that a change in the way we keep health records could save billions. According to the report, widespread use of PHRs could save the US healthcare industry between $13 and $21 billion a year.

All of this evidence suggests that the PHR has extraordinary value including the ability to eliminate redundant testing, save billions in healthcare costs and ensure that a patient’s full information is available to all their physicians at the point of care. In an emergency the PHR can be a lifesaver, providing vital information including diseases the patient is being treated for, drugs the patient is allergic to and how to contact the primary care provider or other emergency contact to coordinate care.

In conclusion, although there are no answers as to why the PHR has not been more  widespread,it is time to bring it back, so that every patient can benefit from more efficient, cost effective and safe medical practice.